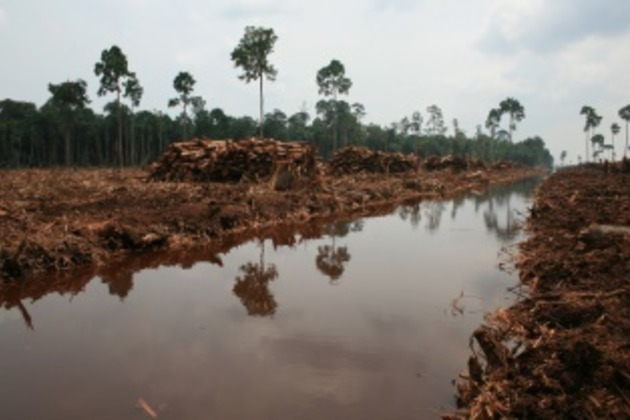 Greenhouse gas emissions from drained and burning peatlands account for up to 5 per cent of anthropogenic carbon emissions. These emissions are rising due to increasing peat degradation and loss from agriculture and fires, and driving the world closer to a dangerous tipping point.

Rising temperatures can cause a chain reaction in which thawing permafrost switches boreal and Arctic peatlands from carbon sinks to sources, emitting huge amounts of greenhouse gas. Peat carbon stocks are equivalent to at least 60 per cent of all atmospheric carbon, meaning they hold the potential to send climate change spiraling out of control.

"Even with current pledges under the Paris Agreement, we are heading for a global temperature rise of over three degrees Celsius this century," said Erik Solheim, head of UN Environment. "This will cause misery and chaos for millions of vulnerable people, so we cannot afford to let any opportunity to reduce emissions slip by.

"Taking urgent action through the Global Peatlands Initiative can help us limit climate change. It is critical we do not reach the tipping point that will see peatlands stop sinking carbon and start spewing it into the atmosphere, destroying any hope we have of controlling climate change."

Despite their importance, peatlands are coming under increased threat, mainly from conversion for palm oil and pulp wood production. Drainage of peatlands can result in environmental problems, most visible being the enormous fires in Indonesia and Russia in recent years.

In Indonesia, the worst days of the peat forest fires resulted in emissions greater than the daily emissions from the entire United States economy. In the Nordic and Baltic states, drained peatlands are responsible for 25 per cent of all emissions.

The impacts of peatland degradation go beyond emissions. Recent studies have suggested that the 2015 Indonesian peat fires affected 43 million people, indirectly killed up to 100,000 people through the toxic haze, and led to US$ 16.1 billion in overall economic damage (twice the value of the Aceh Tsunami Reconstruction).

The Global Peatlands Initiative, led by UN Environment with support from over a dozen partners, is the largest collaborative effort on peat so far. It aims to increase the conservation, restoration and sustainable management of peatlands in countries with significant peat deposits, delivering benefits for agriculture, biodiversity and the climate.

The initiative was launched at the Global Landscapes Forum, the leading side event of the UN's COP22 climate change talks in Marrakech, Morocco.

Tropical peatlands are home to a number of endangered species including Sumatran tigers, gorillas and orangutans. Boreal, sub-Arctic and Arctic peatlands provide habitat to species with unique adaptations such as caribou and muskox. Peatlands also support important traditional knowledge, local economies and practices.

Peat is burned as fuel, sold in gardening centres as potting soil, is highly prized as agricultural land (when drained) and is used in the production of whisky. Because of its importance and multitude of uses, the European Union regulates the use of peat, ASEAN has adopted a regional peat management strategy and Ireland and Scotland are among a number of countries that have developed national peat strategies.

US government warns Americans to avoid travel to Singapore

WASHINGTON D.C.: The Centers for Disease Control and Prevention (CDC) and the State Department have warned Americans to avoid travel ...

TOKYO, Japan: During a televised debate with eight political leaders prior to the national elections on 31st October, Prime Minister ...

Nations in South Pacific shifting allegiance from Australia to China

In the wake of the AUKUS deal, Beijing's hosting of a summit involving many tiny Pacific countries is significant. It ...

As Covid returns, Austria warns of lockdown for unvaccinated

Germany reports 15,145 new infections in one day, highest since May

BERLIN, Germany: On Saturday, Germany recorded the highest number of new coronavirus cases since mid-May, rising from 95 to 100 ...

MOSCOW, Russia: As Russia recorded the highest numbers of coronavirus infections and deaths since the pandemic began in 2020, beginning ...

4,000 pound sunfish is largest ever seen by experts