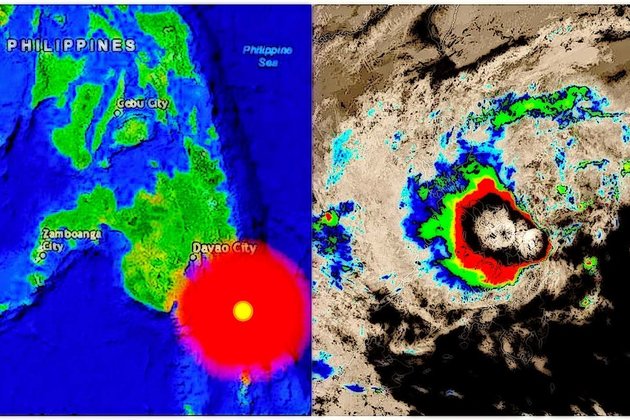 MANILA, Philippines - Philippines witnessed two disasters on Saturday, after a strong undersea earthquake first struck off the southern part of the country, while the tropical storm Usman swept through the central Philippine islands, causing landslides.

At 11.39 am local time, a powerful magnitude 7.1 undersea earthquake struck off the southern Philippines, triggered a brief tsunami warning.

The Philippine Institute of Volcanology and Seismology said that the quake struck at a depth of 49 kms (30 miles).

It said the quake was detected about 162 kms (100 miles) off Davao Oriental province and immediately issued a public advisory, warning people to stay away from the coast.

The Philippines' government seismology office said in its tsunami warning, "People are advised to stay away from the beach and not to go to the coast fronting the Philippine Sea for about two hours."

It warned that "minor sea level disturbances" were expected until 2 pm and said that the quake could generate aftershocks.

According to the country's quake-monitoring agency, cities in the south of the country felt "moderately strong" shaking and local reports noted that people in cities near the epicentre, rushed out of their buildings due to the impact of the quake.

However, civil defence offices in the affected areas confirmed that no damage or aftershocks were experienced due to the quake.

Following the strong tremor, the U.S. Pacific Tsunami Warning Center warned of a potential tsunami that could hit coastal areas of the southern Philippines and Indonesia.

The agency warned that the coasts of Indonesia, the Philippines and Palau may see tsunami waves of less than a foot above tide levels.

Subsequently, the tsunami advisories issued by both the agencies was cancelled.

The U.S.G.S. initially recorded the quake at 7.2 magnitude, revising it to 6.9 and changing that to 7.0 later.

While the agency warned that recent earthquakes in the area had caused landslides, the agency also stated in its update that there was a low likelihood of casualties and damage from Saturday's quake.

The Philippines and Indonesia lie in the geological disaster zone in the Pacific called the Ring of Fire, which has seismically active tectonic plates.

The series of fragile fault lines that form the Ring of Fire stretch 25,000 miles from New Zealand, across the east coast of Asia through Indonesia, the Philippines and Japan, over to Alaska, Canada and the U.S. West Coast then down to the southern tip of South America.

Overall, the Ring of Fire contains 452 volcanoes and several tectonic plates in the earth's crust and more than half of the world's active volcanoes above sea level are part of the ring.

The Philippines witnessed its most recent major quake disaster in 2013, when a 7.1 magnitude quake killed over 220 people and destroyed historic churches.

Saturday's quake in the Philippines came a week after an erupting volcano triggered a deadly wave that struck the coastlines of western Java island and south Sumatra, killing over 400 people in Indonesia.

In another part of the country, heavy rains caused by tropical storm Usman triggered landslides that caused the death of four people.

The storm swept through the central Philippine islands on Saturday, forcing thousands of people to evacuate their homes and killing four people through the day.

According to the Philippines Civil Defence office, tropical depression Usman made landfall in Eastern's Visayas' Borongan after which it weakened to a low pressure area (LPA).

Usman, which was expected to be the last weather disturbance in the Philippines this year, lashed the Bicol region and parts of the Visayas islands, forcing nearly 12,000 people to evacuate their homes.

The Philippines weather station said that the weather disturbance packed maximum winds of 65 kms per hour.

The Civil Defence office said on Saturday afternoon that Usman's winds were not too powerful, but the storm brought heavy rains that caused landslides and flooding in areas it traversed.

Major roads in Capiz, which is in the Western Visayas region, witnessed floods caused by heavy rains.

Cavite-Laguna-Batangas-Rizal-Quezon (Calabarzon), Mindoro, Marinduque, Romblon, and Palawan (Mimaropa), Bicol and the province of Aurora also experienced heavy rainfall due to the storm.

The Philippine Atmospheric, Geophysical and Astronomical Services Administration (Pagasa) said in a statement, "Residents of the aforementioned areas, especially those living near river channels and in low-lying and mountainous areas, are advised to take appropriate measures against possible flooding and landslides, coordinate with local disaster risk reduction and management offices, and continue monitoring for updates."

Authorities also confirmed that a woman was crushed by another landslide in Bulan town after heavy rains loosened the earth.

As the storm continued to affect parts of the country, the cities it passed through reported large scale damage.

In an alert issued on Facebook, the Department of Public Works and Highways (DPWH) said that the impact of the low pressure area had forced the closure of eight road sections in the Bicol region and Eastern Visayas.

DPWH Secretary Mark Villar shared a photo of the list of the closed roads and wrote in the Facebook post that the closure was "due to flooding, collapsed roadway and landslides."

Meanwhile, the Regional Disaster Risk Reduction and Management Council said late on Saturday that Usman had prevented 12 ships from leaving ports and had stranded 328 vehicles on Roll-On-Roll-Off ferries.

The storm was forecast as moving west across the central islands at 10 kms per hour and was expected to be over the South China Sea by Sunday.

In November 2013, the country witnessed its deadliest storm on record. 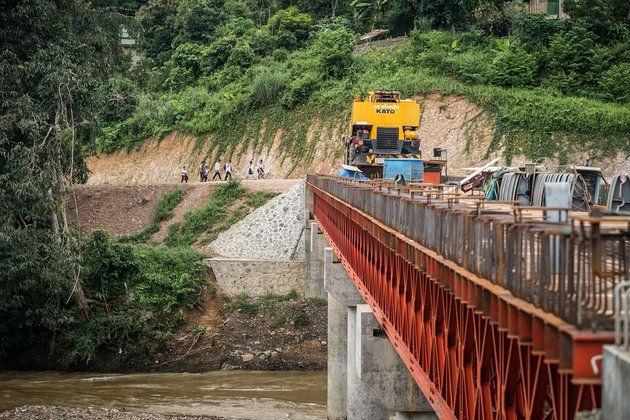