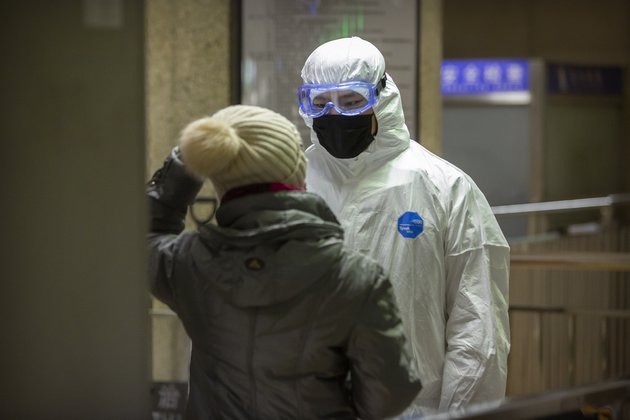 BEIJING - China has locked down 10 cities out of concern about the spread of the mysterious new coronavirus, which has infected more than 880 people and killed at least 26.

The all-out effort to curb the disease involves military doctors and the creation of scientific and infrastructure arrangements to deal with the challenge. Work on constructing a 1,000-bed hospital to quarantine and treat patients suspected to have the virus, which causes pneumonia, has begun in the city of Wuhan, the epicenter of the disease. Wuhan is the capital of Hubei province.

But there are questions about whether it will have a widespread economic impact and affect China's international reputation.

The coronavirus is spreading at an intense pace with suspected cases being reported in 29 of China's 31 provinces and the United States, Thailand, Taiwan, South Korea, Japan, Vietnam and Singapore. China's finance ministry has allocated the equivalent of $144 million to fight the disease.

The World Health Organization has decided against labeling the coronavirus as an international risk for the time being, but will review the decision soon. WHO members were sharply divided on the issue during meetings this week at its headquarters in Switzerland.

WHO Warns Coronavirus Is 'High Risk,' Stops Short of Declaring Emergency Experts warn true number of cases could be much higher than 584 reported infections

"The focus is not so much on the (case) numbers, which we know will go up," WHO spokesman Tarik Jasarevic told a Geneva news briefing. "It's still too early to draw conclusions."

Some of the initial symptoms can mirror those of the cold and flu, including a cough, fever, tightening of the chest and shortness of breath. Severe cases turn into pneumonia.

Transmission rates are likely to be high as millions of people are now traveling to sightseeing places across China and overseas as part of the Spring Festival ahead of the Chinese New Year on Saturday.

WHO Expects Coronavirus Cases, Deaths to Escalate UN agency says the number of reported cases and deaths is probably an underestimation

The spread of disease can easily affect factory production because staffers work in clusters on production floors. That might have an impact on China's economy, which is already struggling at 6.1 percent gross domestic product growth in 2019, the lowest in 29 years.

Government efforts are focused on creating physical barriers like the lockdown within cities to stop the spread of the disease. A bigger challenge involves identifying the virus and finding vaccines and medicine to address it.

Much depends on the speed at which the disease may spread and the ability of scientists to come up with a possible cure. The structure, origin, nature and transmission capability of the virus, known as 2019-nCoV, are still unknown.

WATCH: How is the Coronavirus Transmitted?

Sorry, but your player cannot support embedded video of this type, you can download this video to view it offline.

China's health authorities have issued tentative guidance that doctors can use during the process of diagnosis and treatment.

Early assessments by scientists show that each infected person is passing the virus on to an estimated average of between one and three people. That transmission rate suggests that the virus is capable of sustaining itself, a dangerous signal that underlines the need for a vaccine.

Chinese and U.S. experts are working together to find solutions. Experts at Shanghai's Fudan University are working on a vaccine project with those at Baylor College of Medicine in Texas, the University of Texas and the non-profit New York Blood Center.

"[Vaccine] development is not a fast process, and it's not clear whether we would have a vaccine ready to use before this current epidemic ends," Peter Hotez, dean of Baylor College's National School of Tropical Medicine, told Chinese government news agency Xinhua. He expressed fear there might be more cases in the U.S., which has recorded two confirmed cases so far.

Second US Patient Identified With Coronavirus The woman in her 60s is in Chicago, and she returned January 13 from China showing no signs of the acute respiratory illness

Scientists from the elite Chinese Academy of Sciences have made some progress in identifying the structure of the virus. They said that its genome is 96 percent identical to a bat coronavirus, and 79.5 percent similar to the Severe Acute Respiratory Syndrome (SARS) coronavirus, which killed more than 700 people internationally from 2002-2003.

In an article published in the Journal of Medical Virology, a group of scientists said the virus may have been harbored by snakes which were slaughtered and sold for their meat in wet markets of Wuhan. But there is no official confirmation about the findings.

A nationwide effort aimed at separating and quarantining people with fever and other suspected symptoms has been launched with heat meters being put up in airports and bus, railway and subway stations, as well as other places where people congregate.

At Least 10 Chinese Cities on Lockdown; 830 Confirmed Coronavirus Cases Across Country World Health Organization says deadly virus is not yet a global emergency

The National Health Commission has put 8,420 people who came in contact with infected patients under close observation.

A part of the Great Wall of China and several sightseeing places like the Forbidden City in Beijing have been closed to visitors to avoid crowding, which can result in disease transmission. An international carnival and a major soccer (football) match have been canceled in Hong Kong. Shanghai's Disney Resort and MacDonald's restaurants in five cities have also been closed.

People returning home after visits to the affected areas in Hubei province have been urged to stay home for 14 days to prevent possible transmission.