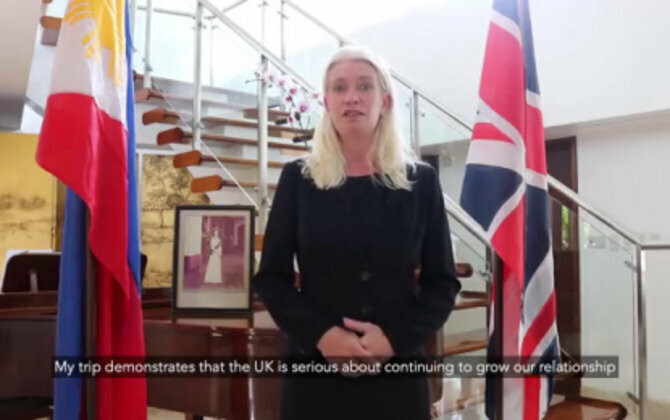 MANILA -The United Kingdom's (UK) Minister of State for Asia on Monday expressed her country's "serious" desire to grow its relationship with the Philippines and other countries in the Association of Southeast Asian Nations (Asean).

In a video posted on Twitter, Amanda Milling said she spent the last three days in the Philippines and met with Cabinet secretaries and other high-ranking Philippines government officials to discuss "shared interests" such as climate change, regional security, business prospects, Covid-19, and human rights.

Milling's visit is the first by a Foreign, Commonwealth and Development Office (FCDO) minister since the UK's confirmation as an Asean Dialogue Partner in August.

It was her first visit to Asia and coincides with the UK's 75 years of diplomatic relations with the Philippines.

She noted that the Indo-Pacific region, where the Philippines and other Asean countries are located, is "of huge strategic importance to the UK."

"In the Philippines, a founding member of ASEAN, I reiterated our commitment to working with the region on vital issues such as maritime security and building back better after Covid-19," Milling said.

During her visit, she also went to the Manila-American cemetery to pay her respects and had the Philippines removed from the UK travel red list, allowing those in the country to travel to the UK.

Her visit to the Philippines is the first stop of an Indo-Pacific tour that would include Singapore and Japan. (PNA)

LOS ANGELES, California: Netflix has raised its monthly subscription price from $13.99 to $15.49 per month in the United States. ...

Not since the 1936 Olympics in Berlin has a government tried to prevent an athlete from competing in a sporting ...

TOKYO, Japan: Twin panda cubs have made their first public appearance before devoted fans at Ueno Zoo in Tokyo. However, ...

LONDON, England: A rare warning by the UK's MI5 intelligence agency has revealed that a Chinese agent, Christine Ching Kui ...

One of world's oldest gorillas put to sleep at Atlanta Zoo

ATLANTA, Georgia: Zoo Atlanta's gorilla, one of the oldest in captivity at 59 years, was euthanized on January 13 due ...

COPENHAGEN, Denmark: An official at the highest level of the Denmark government has been charged with leaking state secrets. Claus ...

KIEV, Ukraine: Many government websites in Ukraine have suffered cyberattacks, with the intruders posting the text, "Be afraid and wait ...