UN chief calls for injection of liquidity into Afghan economy 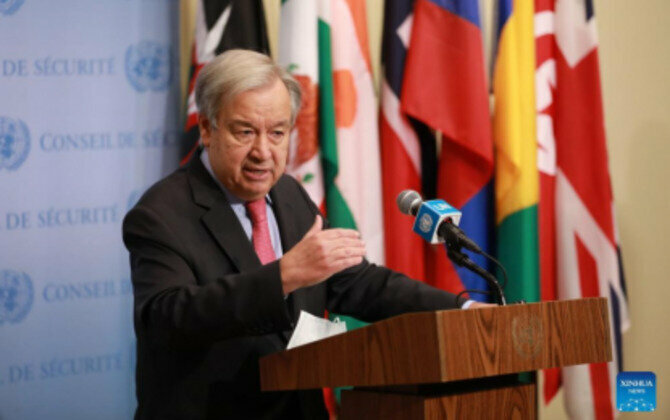 In addition to humanitarian aid, the international community needs to act to prevent the economic collapse of Afghanistan, he told reporters.

Even before the Taliban takeover in August, Afghanistan's fragile economy, which has been kept afloat by foreign aid over the past 20 years, suffered from the impact of drought and Covid-19. Right now, with assets frozen and development aid paused, the economy is breaking down. Banks are closing, and essential services, such as health care, have been suspended in many places, he noted.

"We need to find ways to make the economy breathe again. And this can be done without violating international laws or compromising principles. We must seek ways to create the conditions that would allow Afghan professionals and civil servants to continue working to serve the Afghan population," he said.

"I urge the world to take action and inject liquidity into the Afghan economy to avoid collapse," Guterres said.

This is a make-or-break moment, warned Guterres. "If we do not act and help Afghans weather this storm, and do it soon, not only they but all the world will pay a heavy price."

Without food, without jobs, without their rights protected, more and more Afghans will flee their homes in search of a better life. The flow of illicit drugs, criminal and terrorist networks will also likely increase. This will not only badly affect Afghanistan itself, but also the region and the rest of the world, he warned.

"There are many questions of these that, obviously, the international community will be discussing with the Taliban and that will require that the Taliban abide by a number of important aspects, be it related to human rights and the rights of women and girls, in particular, be it in relation to the question of terrorism, be it ... the inclusivity of the government," he said.

Independently of those measures, there are forums to inject cash inside the economy through different entities, through nongovernmental organizations (NGOs), through UN agencies to allow for the people to receive assistance, he said. "And this is what we have been asking."

There is a need to find ways -- on the basis of respect for international law and principles -- to inject liquidity for the economy not to collapse and for the people not to suffer tremendously, he said. "The Afghan people cannot suffer a collective punishment because the Taliban misbehave."

The diplomatic recognition of the Taliban and the injection of liquidity are completely different things, said Guterres.

While the international community has consensus on humanitarian aid, things in relation to the injection of liquidity into the Afghan economy are moving too slowly, said Guterres.

The main responsibility for finding a way back from the abyss lies with those that are now in charge in Afghanistan, he said.

Since their takeover, the Taliban have -- at various times -- promised Afghan citizens, including women, children, minority communities, former government employees, that they would protect their rights. Central to those promises was the possibility of women to move, work and enjoy their basic rights, and for girls to have effective access to all levels of education, the same as boys, he said.

"Gender equality has always been an absolute priority for me. ... I am particularly alarmed to see promises made to Afghan women and girls by the Taliban being broken," said Guterres. "Broken promises lead to broken dreams for the women and girls of Afghanistan."

He said women and girls need to be the center of attention and "their ability to learn, work, own assets, and live with rights and dignity will define progress."

"Eighty percent of Afghanistan's economy is informal, with a preponderant role of women. Without them, there is no way the Afghan economy and society will recover," he said. "I strongly appeal to the Taliban to keep their promises to women and girls and fulfill their obligations under international human rights and humanitarian law."

The UN is permanently engaging with the Taliban on the safety and security of its staff, humanitarian assistance and unhindered access for all, including female staff, and human rights with particular focus on women and girls' rights, he said.

The humanitarians have been acting with the cooperation of the Taliban, who have progressively granted access to the areas requested and provided security when needed. The number of incidents during humanitarian operations has been in constant decline, he noted.

The UN is engaging with the Taliban and progress is being made, said Guterres.

The humanitarian crisis is growing in Afghanistan, with at least 18 million people -- half of the country's population -- needing help. UN agencies and humanitarian NGOs in Afghanistan are in a race against time to deliver life-saving aid to crisis-affected people and pre-position supplies ahead of winter, he said.

Despite financial shortfalls, logistical challenges, and an increasingly complex geopolitical situation, the UN is undertaking a massive humanitarian operation in the country. (Xinhua)