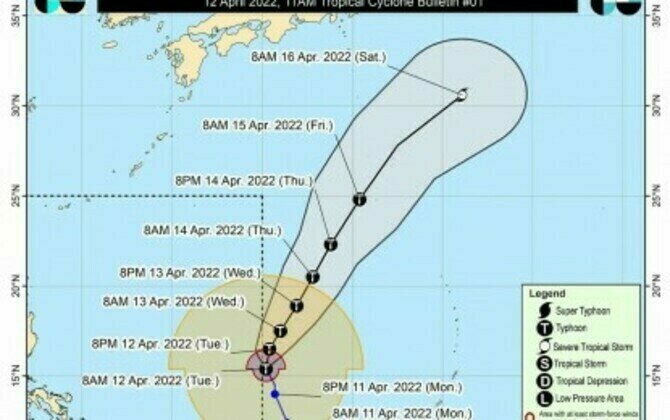 MANILA -- Typhoon Malakas has entered the Philippine Area of Responsibility (PAR) and was given the local name "Basyang," the weather bureau said in an update posted Tuesday noon.

The typhoon entered PAR at 10 a.m. but is not expected to have a direct effect on the country's weather, according to the Philippine Atmospheric, Geophysical and Astronomical Services Administration (PAGASA).

"Basyang" is also unlikely to directly affect the coastal waters' sea condition, but swells resulting from the typhoon is forecast to generate moderate to rough seas over the northern and eastern seaboards of Luzon, as well as the eastern seaboards of the Visayas and Mindanao.

The typhoon was last tracked 1,435 kilometers east of southern Luzon, and is forecast to exit PAR in the evening.

The TD packs maximum sustained winds of 45 kph near the center, and gustiness of up to 75 kph.

Strong breeze to near gale conditions, and rough seas continue to prevail in these areas.

PAGASA reiterated that these conditions may be risky for those using small seacraft. Mariners are advised to take precautionary measures when venturing out to the sea.

Light to moderate, with at times heavy rains will continue to prevail over Mimaropa, Dinagat Islands, Zamboanga del Norte, Quezon, and the rest of the Visayas.

Scattered to widespread flooding and rain-induced landslides are likely, especially in areas highly susceptible to these hazards. (PNA)

OTTAWA, Ontario: Military trainers from Canada will head to the United Kingdom to teach Ukrainians new techniques for fighting the ...