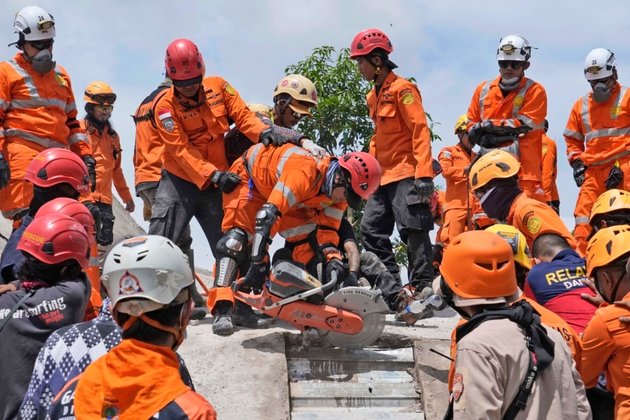 Rescue workers in Indonesia searched Tuesday for survivors a day after a strong earthquake struck the main island of Java.

The regional disaster mitigation agency in Cianjur reported the death toll from the quake rose to 252, with hundreds injured and 31 people still missing.

West Java Governor Ridwan Kamil said after Monday's earthquake that more than 13,000 people whose homes had been heavily damaged were transported to evacuation centers.

Hundreds of injured people fled into the streets of Cianjur following the quake, some covered in blood and debris. The U.S. Geological Survey said Cianjur was the epicenter of the magnitude 5.6 quake.

Shaking was felt in the capital, Jakarta, about 70 kilometers away, where some high-rise buildings were evacuated.

'The majority of those who died were children,' Kamil said. He said many were public school students who had finished their regular classes for the day and were taking extra lessons at Islamic schools. Cianjur is known for having many Islamic boarding schools and mosques.

Emergency workers treated the injured on stretchers and blankets outside hospitals, on terraces and in parking lots in the Cianjur region.

'I fainted. It was very strong,' Hasan, a construction worker who, like many Indonesians, uses one name, told The Associated Press. 'I saw my friends running to escape from the building. But it was too late to get out and I was hit by the wall.'

The sirens of ambulances continued to sound late into the night in Cianjur.

Several landslides closed roads near Cianjur. Among the dozens of buildings that were damaged were an Islamic boarding school, a hospital and other public facilities, authorities said. Power outages were reported.

The disaster mitigation agency warned of the possibility that more landslides could occur in the event of heavy rain.

Indonesia, with a population of more than 270 million people, is frequently hit by earthquakes, volcanic eruptions and tsunamis because of its location on the 'Ring of Fire,' an arc of volcanoes and fault lines in the Pacific Basin.

A powerful Indian Ocean quake and tsunami in 2004 killed nearly 230,000 people in a dozen countries, most of them in Indonesia.

Some information for this story came from The Associated Press, Agence France-Presse and Reuters.